Katharine Hamnett is a British fashion designer known for her protest and political T-shirts. In 2003, supermodel Naomi Campbell was seen wearing a “shirt” designed by Hamnett that reads “USE A CONDOM.” Hamnett’s T-shirts often feature statement slogans that aim to raise awareness about AIDS and STDs.

The “USE A CONDOM” Top worn by Campbell was likely a part of Hamnett’s spring/summer 2004 collection. Hamnett has been praised for her use of fashion as a means of making a statement and promoting social and political causes. The “USE A CONDON” shirt is just one example of her work that aims to raise awareness about important issues and inspire people to take action. 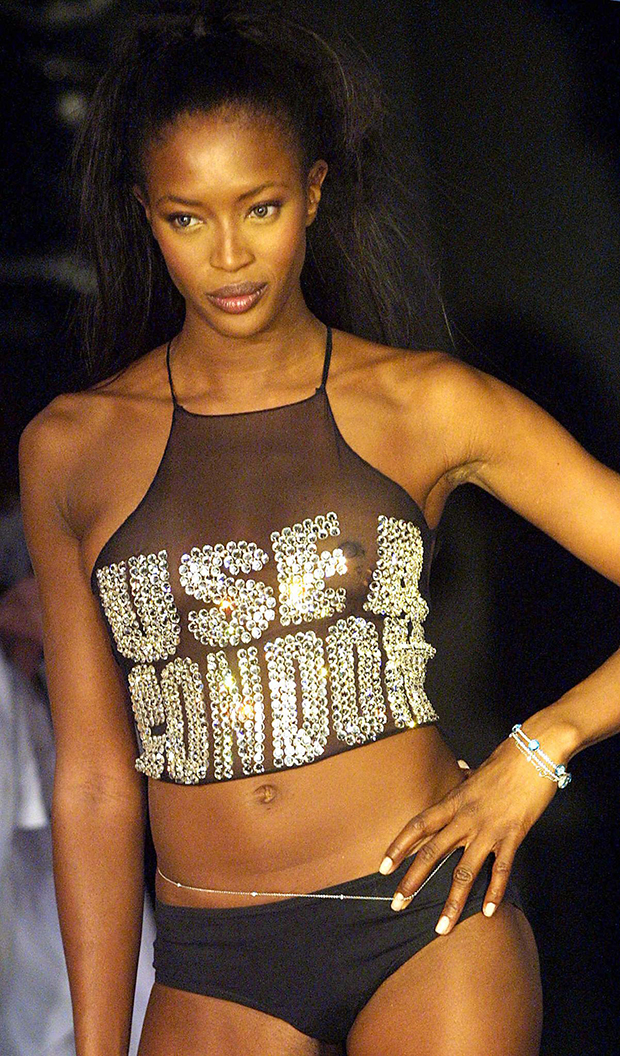 Naomi Campbell is a world-renowned supermodel and actress who has been in the entertainment industry for over three decades.

Born in London in 1970, Campbell was discovered at the age of 15 and quickly rose to fame as a model. She has graced the covers of numerous magazines, including Vogue and Harper’s Bazaar, and has walked the runway for top designers such as Versace, Chanel, and Dolce & Gabbana.

In addition to her successful modeling career, Campbell has also ventured into acting. She has appeared in films such as “Cool as Ice” and “Girl 6,” and has guest starred on television shows like “Empire” and “American Horror Story.”

Beyond her professional accomplishments, Campbell is also known for her philanthropic efforts. She has supported various charities and has served as an ambassador for the British Fashion Council and the Prince’s Trust.

In short, Naomi Campbell is a multifaceted and accomplished woman who has made a significant impact in the fashion and entertainment industries. Whether on the runway or on the screen, she continues to captivate and inspire audiences around the world.