What’s better than an horror special to celebrate Friday the 13th?!

Let’s do it with 4 very best fictional slashers ever created by the twisted human mind.

Our four iconic horror movie villains have been scaring audiences for decades. Jason Voorhees, Michael Myers, Freddy Krueger, and Leatherface are some of the most recognizable names in the horror genre and have become synonymous with fear and terror. 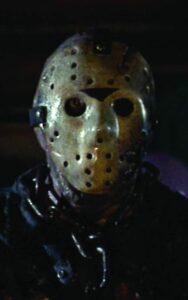 The character of Jason Voorhees was created by screenwriter Victor Miller and made his first appearance in the 1980 film Friday the 13th. He appeared throughout the entire Friday the 13th franchise, as a seemingly unstoppable killer who terrorizes a group of teenagers at Camp Crystal Lake. Jason, who is known for his hockey mask and machete, has become one of the most recognizable figures in horror and has appeared in over a dozen films, television shows, and novels.

In the original film, Jason was a young boy who drowned at Camp Crystal Lake due to the negligence of the camp counselors. Years later, his mother, Pamela Voorhees, seeks revenge on the counselors for her son’s death and begins killing them one by one.

In the sequels, Jason is revealed to have survived his drowning and becomes the main killer. He is depicted as a nearly invulnerable, mute, and psychopathic killer who stalks and kills anyone who comes to or lives near Crystal Lake.

The Friday the 13th franchise is one of the longest-running and most successful horror film series in history, and Jason Voorhees has become one of the most iconic horror movie villains of all time. The character has also appeared in video games, comics and has been featured in numerous merchandise. 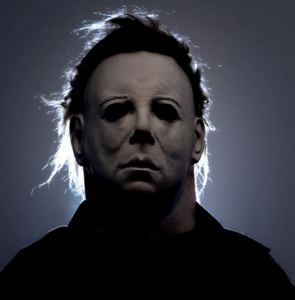 Next is Michael Myers,

Michael Myers first appeared in John Carpenter’s 1978 classic, Halloween. Myers is a silent and relentless killer who stalks his victims, and his iconic white mask has become one of the most recognizable images in horror. Myers has appeared in 12 films in the Halloween franchise of 13 movies. He also appeared in novels, comic books, a video game and other merchandise.

The character of Michael Myers was created by director John Carpenter and made his first appearance in the 1978 film Halloween. In the original film, Michael is a six-year-old boy who kills his older sister on Halloween night. He is institutionalized for 15 years before escaping and returning to his hometown of Haddonfield, Illinois to continue his killing spree.

Throughout the franchise, just like Jason Voorhees, Michael is depicted as a nearly indestructible and silent killer who stalks and kills anyone who gets in his way, with the exception of his main target, Laurie Strode, who has been the center of his obsession for most of the films.

Michael’s mask, which he wears throughout the series, has become iconic and is one of the most recognizable elements of the franchise. The mask is a modified William Shatner mask, which was purchased from a costume store. 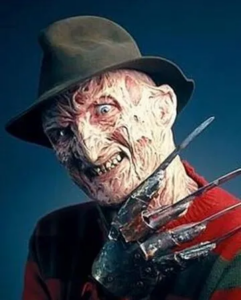 The character of Freddy Krueger was created by director Wes Craven and made his first appearance in the 1984 film A Nightmare on Elm Street. In the original film, Freddy is a child murderer who is burned to death by the parents of his victims. He returns as a vengeful spirit, attacking the children of those who killed him in their dreams.

Throughout the franchise, Freddy is depicted as a sadistic and terrifying killer who stalks and kills his victims in their dreams. He is known for his razor-sharp claws, burned and disfigured face, and his famous red and green striped sweater. He also has a dark sense of humor, often making jokes and puns before killing his victims.

Freddy’s ability to enter and manipulate people’s dreams has made him one of the most unique and terrifying horror villains of all time. His iconic look and his one-liners have become a staple of the horror genre and pop culture. 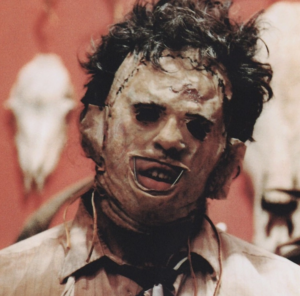 The character of Leatherface was created by director Tobe Hooper and made his first appearance in the 1974 film The Texas Chain Saw Massacre. In the original film, Leatherface is a mentally disabled man who, along with his family, kills and butchers travelers who stumble upon their home. He is known for wearing a mask made of human skin, hence the name Leatherface.

Throughout the franchise, Leatherface is portrayed as a cannibalistic and brutal killer who uses a chainsaw as his weapon of choice. He is usually seen as a pawn of his family, who use him to do their dirty work. He is also known to be mentally unstable, affected by his traumatic past.

Leatherface’s iconic mask made of human skin and his use of chainsaw as a weapon have made him one of the most recognizable and terrifying horror villains of all time. He has become a staple of the horror genre and pop culture.

The Texas Chain Saw Massacre franchise is one of the most successful and enduring horror franchises in history, and Leatherface has become one of the most iconic horror movie villains of all time. Like the three preceeding slashers, he has also appeared in video games, novels, comics and has been featured in numerous merchandise.

Overall, these four iconic horror villains have become staples of the genre and their movies are considered classics. They continue to inspire new generations of horror filmmakers, and their legacies will continue to haunt audiences for years to come.