TRY ME I'LL MAKE YOU FAMOUS shirt as worn by
The American Bad Ass The Undertaker.

"IF YOU TRY ME, I'LL MAKE YOU FAMOUS!" is actually the name of The Undertaker aka American Badass pro wrestling promo in his feud vs. Triple H in the World Wrestling Federation (WWE was known as WWF at the time).
The Undertaker: "Two things. First, I don't know if you realize it or not, but you're trespassing on private property. You see, when you step through here, through these ropes... you're in my yard, and I can tell you this: You don't wanna be here! Bad things happen in my yard. Bad things have been happening here for a very long time. Hell, you oughta know this better than anybody else. Because while you were scratching, and kicking, and clawing, and screwing your way to the top of the mountain, you see, I was burying people underneath that mountain, making it bigger all the time.
Which brings me to my second point. Yeah, you've come a long way in 7 years. You play the game really well. In fact, there may be a day where you even run the yard. But this ain't your day, boy. Now, I heard you say you beat The Rock, you beat Austin, you beat this guy, you beat that guy. Yeah, that's real good. Good for you, Triple H. But I'm gonna let you in on something. I ain't the People's Champion, I ain't no Rattlesnake... I'm the Deadman... and if you try me, I'll make you famous.
Because it's like this, little man, you ain't ever beat me. Now I don't like you, I don't respect you, and I sure as hell don't fear you. But seeing how you're standing in the middle of my yard, I will break you."
- WWF Smackdown (08.03.2001) 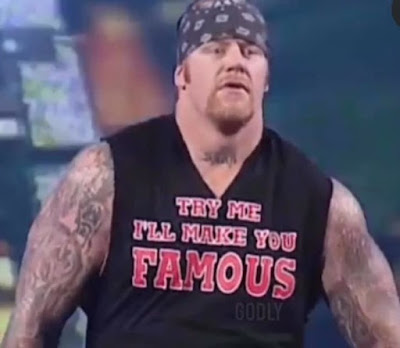 The Undertaker (Mark Calaway) is a legit badass in and out of the ring.